Small-leaved lime – on the street Labská, near the Monument to the Fallen Ones, plot 786/3, Kozly

Black poplar – a group of four trees in a protected dike on the banks of the Elbe river, plot 826/17, Kozly

Natural Monumet Jiřina – established in 1933, is located on the right bank of the Elbe river about 1.5 km upstream from Kozly. It has an area of 1.72 hectares. The main purpose of its creation, and even now, is to preserve the last remnats of the original Elbe floodplain forests. The protected forests have all three kinds of oak – summer one, winter one and imorted red. Also there are hornbeam, small-leaved lindens, elms, black poplars, beeches, ashes, norway maples, sycamore maples, field maples and aspens. From the shrubs there are elderberry, hazel, wild privet, dogwood, hawthorn, black berried honeysuckle. The birds that live there are nightingales, river warblers, black woodpeckers and the very rare sparrowhawk.

Natural reservation Všetatská černava – established in 1986, has an area of 2.73 hecatres. It is located in the immediate vicinity of the intersection of two railway lines – from Prague to Turnov and from Ústí nad Labem to Lysá nad Labem and other border is the road from Chrást to Všetaty. The easiest approcach is ensured by road from Všetaty to Kozly that borders the natural locality on the east side. When building the two railway lines in the second half of the 19th century, the excavation of earth and resulting hollow withdrew water, creating the conditions for the emergence of ten plant communities. Claudium Mariscus is the rarest plant, as it does not occur in such large quantities anywhere else in the Czech Republic. Other rare species are low sedge, bog rush, horsetail ramosum, marsh helleborine, long stalked yellow sedge, and marsh orchid.

The natural sandbank monument in Tišice – announced in 1986, was established with construction of the railway from Turnov to Kralupy nad Vltavou. It consists of a railway embankment at the beggining of unprotected crossing at the end of the street Ke Křížku, and continues about 400 meters. On the artificially created sand dune there are many rare sand flowers, especially the cricitally endangered sand jurinea that occurs in the Czech Republic in only in two locations. Furthermore,  the other plants that grow in there are dwarf everlast, moore’s horsetail and gallic rose. 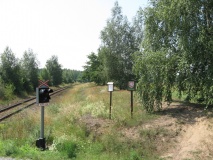 The Church of All Saints – The local Church of All Saints was build in 1352 in the early Gothic style. Its present form dates from 1822,  when the tower was built and the ground plan was modified. Extensive repairs of roofs and facades went hand in hand with renovation of the local cemetery in 1998. The famous Czech painter of the late 19th century, Antonín Slavíček, painted for the church an image of his patron Saint Antonín. Until the 90s of the 20th century, this rare painting hung in the church. After a series of burglaries, the painting was moved to the church’s depositary. 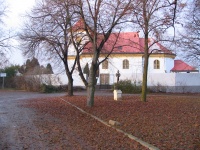 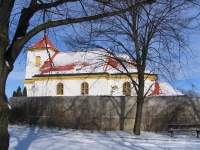